There is a strong emphasis in Film on understanding the key concepts and codes underpinning moving image texts to analyse and evaluate the effect of their message. We will also encounter key theories such as feminism, spectatorship and auteur and use them to focus on the different messages and values of texts, which offers a window into other worlds as well as a sharper reflection of students’ own experiences. It also prepares students for an increasing number of job roles where they must master the art of communication.” 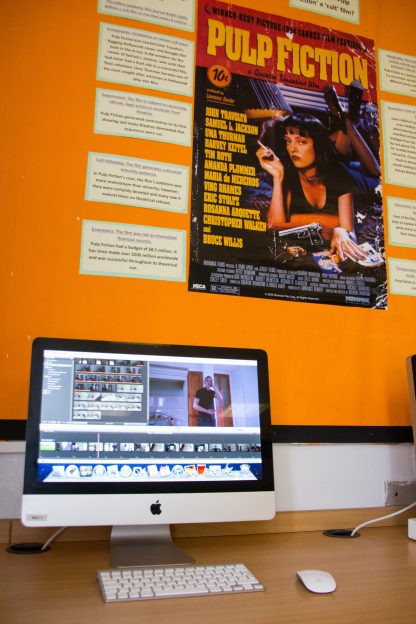 Like its sister subject Media, Film studies performs a vital role within English and draws upon the skills students already have in textual analysis from their studies in English Language and Literature.

During Key Stage 4, Film Studies is offered as a GCSE option choice for students. Students will study the key elements of film form and apply these to a range of different film texts such as Skyfall (Mendes, 2012), Raiders of the Lost Ark (Spielberg, 1981) and The Hurt Locker (Bigelow, 2009). Students will also complete a piece of coursework which is worth 30% of their total GCSE grade.

The analytical skills students have honed and developed over the course of their English studies will be put to good use in GCSE Film Studies, where students will apply their analytical skills to visual, rather than exclusively written, texts.

In KS5, Shire Oak Academy offers A-Level Film Studies. The course builds on GCSE study, but students do not have to have taken GCSE Film Studies in order to choose the A-Level option. The course recaps and extends student understanding of film form through the study of classic films like Casablanca (Curtiz, 1942), Blade Runner (Scott, 1982), and more contemporary British texts such as Trainspotting (Boyle, 1995) and documentary film such as Amy (Kapadia, 2015). The course, like Media, is underpinned by theoretical approaches to the study of Film such as reception theory and feminist approaches. Students enjoy the variety of texts as well as the mature and thoughtful discussion opportunities within lessons.

Degree-level qualifications in Film and Communications and other related subjects such as English, Photography, Art & Design, Psychology and Sociology

As an A-Level, Film Studies can be used to apply for degree-level qualifications as part of UCAS applications.